We are going to tell you the names of some such states in the article. Whose production is at the fore in agriculture? Like where most cotton is grown in India, which state produces the most sugarcane and which state has the maximum cultivation of turmeric and red chilies.

So you must study this post till the end, this post is going to be very useful for you in your daily life and general knowledge subject in any competitive exam. So let’s start the post with the States With the Highest Crop Production list.

Table Of States With Highest Crop Production In India 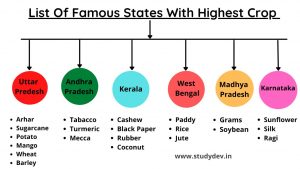 Which state is largest producer of Bajra?

If we talk about the states that grow the most bajra in India, then the number of Rajasthan comes first. It is followed by Uttar Pradesh, Maharashtra, Gujarat, and Haryana.

Which state is largest producer of Grams?

Maharashtra produces maximum red gram and it gives about 33.49 percent of the total production.

The state of Madhya Pradesh produces the maximum number of spices in India. This year 2021 has produced three million metric tons of spices.

which state is the largest producer of wheat in India?

Uttar Pradesh had grown one-third wheat of the total production in the year 2021.

So if you liked this hard work of ours, then definitely share it with your friends on the social media channels given below so that they can also get such information. 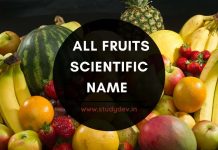 25 Colours Name In Hindi and English With Meaning